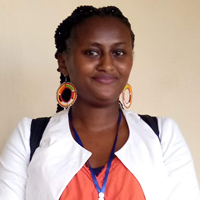 I have a Bachelor’s degree in Biotechnology from Kenyatta University (2015) and a Postgraduate diploma in Health Research Methods from Pwani University (2016). I also hold a Master’s in Bioinformatics degree from the University of Nairobi having done research project on malaria drugs resistance (2020). I have a passion to work on research on infectious diseases which are a major cause of morbidity and mortality in developing nations.

In regions having high malaria transmission, majority of the population are presumed immune to malaria, with non-pregnant women showing quicker clearance of parasites in comparison to the pregnant. Study genotyped SNPs in Plasmodium falciparum genes associated with antimalarial drugs resistance to determine mutations in parasites with varying clearance using Sanger sequencing and MassARRAY. Pregnant women did not carry parasites strains having mutations conferring resistance to artemisinin. The study did not find statistical differences between the pregnant and non-pregnant women groups to support suggestions that low immunity in pregnancy could be a source of resistant parasites strains or their reservoir. 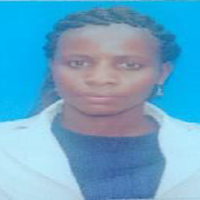 Martha Nginya Kivecu is a MSc. Bioinformatics student under Developing Excellence in Leadership and Genetics Training for Malaria Elimination in sub-Saharan Africa (DELGEME) scholarship.
Her MSc. project involved Evaluation of P. falciparum Histidine Rich Protein 2 (Pfhrp2) and 3 genes deletions in Kenya. Which she conducted at KEMRI-US Army Medical Research Directorate Africa-Kenya, Malaria Drug Resistance lab, Kisumu. During her masters, she was awarded a NIH travel award for a short talk presentation at Keystone symposia, Kampala Uganda 2018. She was also awarded best presenter genomics, diagnostics and innovation- session 2 at KEMRI- Annual Scientific and Health Conference (KASH) 2020.
She holds Bachelors of Science degree in Biochemistry from Pwani University and a Postgraduate Diploma (PGD) in health research methods from the same University. Her PGD was through a studentship offered by Initiative to Develop African research Leaders (IDeAL) based at KEMRI Wellcome Trust Research Programme. Her PGD project looked at the genetic variation of Apical Membrane Antigen 1 (AMA 1) in Plasmodium falciparum field isolates collected over 18 years in Kilifi county, Kenya.
Prior to joining PGD, she worked as an intern at KEMRI National Influenza Centre (NIC), where she was involved in surveillance of viral causes of respiratory infection.

Thesis Project Title: Evaluation of Plasmodium falciparum histidine rich protein 2 and 3 genes deletion prevalence in Kenya and its implication to RDTs use

Globally, Rapid Diagnostic Tests (RDTs) diagnoses about 75% of all suspected malaria cases. The accuracy of the most frequently used Pfhrp2 based RDTs can be compromised by deletion in Pfhrp2 gene or cross-reaction with Pfhrp3 antigens. The WHO criteria necessitate accuracy above 95 % as the threshold for selection or withdrawal of RDTs advocating for vigorous Pfhrp2 gene deletions mapping. This study investigated the prevalence of Pfhrp2/3 genes deletion as well as their polymorphisms in three of five malaria transmission zones in Kenya.
Generally, 350 samples (255 Post-RDTs and 95 Pre-RDTs) from the epidemiology of malaria drug resistance study were diagnosed for malaria by microscopy, Pfhrp2/pan RDTs and P. falciparum PCR. All P. falciparum PCR positive samples, were genotyped and sequenced using primers targeting Pfhrp2 and Pfhrp3 genes.
The prevalence of single Pfhrp2 gene deletion was 0.3% while that of Pfhrp3 was 2.1% of the 327 P. falciparum PCR positive samples. No sample had double deletion of both Pfhrp2 and Pfhrp3 genes. Twenty one (10.8%) of the 195 samples positive by P. falciparum PCR (with 30 parasites per microliter) and pan RDTs were negative by Pfhrp2 based RDTs. However, all the 21 samples had Pfhrp2 and only one sample (4.8%) had deletion of Pfhrp3 gene. Thirty-eight of the 69 Pfhrp3 sequences had partial deletion while the rest had no deletion. Amino acid repeat type 4 and type 16 were the most frequent.
This study findings shows that Pfhrp2 and Pfhrp3 genes deletion are indeed present in Kenya among the symptomatic individuals enrolled. However, these genes deletion could not be associated to false negative RDTs results. 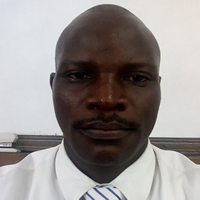 Date and place of Birth: Johnstone OtienoOmia was born on 9th August 1978 in Nandi Hills and was baptized on 12th December 1978.

Family: He is the fifth born child to the second family of his father John Omia. His mother is Rebecca Mwenesi. He is married with two children.

Education: He attended Kimondi primary school from 1985 to 1993, He passed his KCPE exam with 517/700 marks and selected to join Kapsabet Boys High school in February 1994. However, due to lack of enough school fees his studies at Kapsabet boys High school were cut short. He was admitted to Givogi high school after his cousin Caleb Mweresa, convinced him and his mother to join the school because as it was an affordable. He sat for his KCSE exam in 1997, obtained a mean grade of B plus with 83 points. He joined Egerton university in 1999 and graduated in 2004 with a Honors degree in B. Ed. Science. He was admitted to the university of Nairobi, CEBIB to study anMsc. degree in Health and Environmental Biotechnology completed his studies in 2020.

Work: He has taught at various institutions at high school level and also at Technical university of Mombasa.

Thesis / Project  Title: Characterization of circulating Coxsackieviruses in Kenya in 2007

Coxsackieviruses (CVs) infect humans and cause various Coxsackievirus infections (CVIs). CVs are classified in Picornaviridaefamily, genus Enterovirus and are of species A and B. Currently,CVIs have no specific cure but are managed by various methods. Unmanaged CVIs may be fatal. In 2007, a high prevalence of influenza-like illnesses (ILI) was detected by clinicians engaged to carry out ILI survey in selected regions of Kenya by the US Army Medical Research Directorate Kenya (USAMD-K). Twenty-two (22) out of 2925 nasopharyngeal samples collected from patients were positive for CVIs through IFA procedure. Whereas CVs caused some of the ILIs, the prevalence of CVIs, the identity of the CVs and other virologic characteristics were unknown. To begin to address this knowledge gap, this study was carried out with the main objective being to serologically and molecularly characterize CVs in the 22 samples to determine the prevalence of CVIs, species, serotypes, the phylogeny, and the evolution of the CVs to relate the data to ILIs of 2007. The CVs were multiplied in Rhabdomyosarcoma (RD) cells, their RNAs extracted and their partial VP1 genes amplified and sequenced. Twelve (12) CVs of CV_B species; serotypes CV_B2-CV_B5 were identified, 11NS were assigned accession no.s MH522779 - MH522789 and uploaded on GeneBank servers on 10th March 2019. Seroprevalence nice actual prevalence of CVIs were 0.74% and 0.41% respectively. All the CVs had mutations and only of CVs of serotypes CV_B2 and CV_B3 had evolved divergent VP1 proteins with high infectivity that partly caused the high prevalence of ILIs in 2007. Data from this study enriches the information base on CVs in Kenya and can be used to develop diagnostics and therapeutics against CVIs. 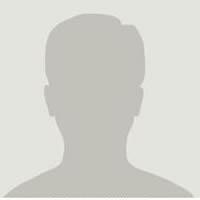 END_OF_DOCUMENT_TOKEN_TO_BE_REPLACED

© University of Nairobi 2021.  All rights Reserved.